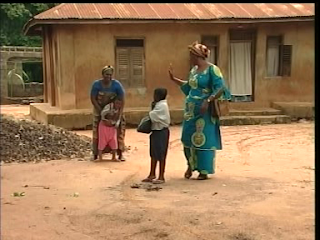 The movie starts withPatience Ozokwor (NNWAYI ORJI) who just arrived a village to supposedly visit her friend. She went to request that her friend release her child to go to the city were he would supposedly be well taken care of and she finally agrees to release Chinedu ikedieze(Onyeka) and this leaves his sibling OsitaIheme(Uche) behind.

Patience Ozokwor (NNWAYI ORJI) continued in the act and got more children from the village to serve people in the city. She herself was just a random woman who sells kolanut as a means of survival. She later went on to take OsitaIheme (Uche) to the city in pretence that he was going to join his brother and fortunately for her, on reaching the village the little boy happened to be sick which aided her in convincing his mother that if he was taken to the city he would be well taken care of. On getting to the city he started selling Pure water and minerals which was not supposed to be the initial plan.