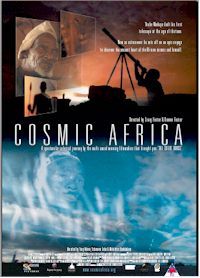 Cosmic Africa is a tale of simple lives in Africa. "People threw their people off the cliffs, rather than see them starve".

In a journey that stretched from Namibia to the coastline and steamy jungles of Ghana, across crocodile infested lakes and deserts of Northern Kenya, the cliff-side dwellings of the Dogon in Mali and on to the mysterious archaeological sites of the Egyptian Sahara, the recently launched film Cosmic Africa explores Africa's ancient astronomy history.

Cosmic Africa , a co-production between Cosmos Studios, Åland Pictures and Anne Rogers is a unique 72 minute feature length documentary film that both explores and sheds new light on traditional African astronomy and in turn global understanding of the world's oldest science.